onda is one of the most beautiful of Andalusia

One of southern Spain’s most famous attractions, Ronda’s epic Puente Nuevo or New Bridge, spans the 328-feet-deep El Tajo gorge, linking El Mercadillo (The Little Market), the newer part of town, with the old Moorish quarter. Completed in 1793, it took some forty years and the lives of 50 construction workers to build.

For just 2.50 euros you can visit the museum in a little stone-walled cavern in the middle of the bridge, which was used as a prison throughout the 19th century and during Spain’s Civil War (1936-1939). It is also said, that during the Civil War both Republican and Nationalist prisoners whose luck had run out were thrown from the bridge to their deaths. For a searing fictionalization of a massacre which it is said was loosely-based on events in Ronda, see Hemingway’s For Whom the Bell Tolls.

Opened in 1785, Ronda’s stately bullring is now used just once a year for the exclusive annual bullfight of the town’s September Feria. It was on the pale sands of this historic arena that a new kind of bullfighting was forged by Francisco Romero in the 18th century. Romero introduced the now iconic red cape known as “the muleta” and faced the bull on foot, whereas before matadors had performed on horseback. 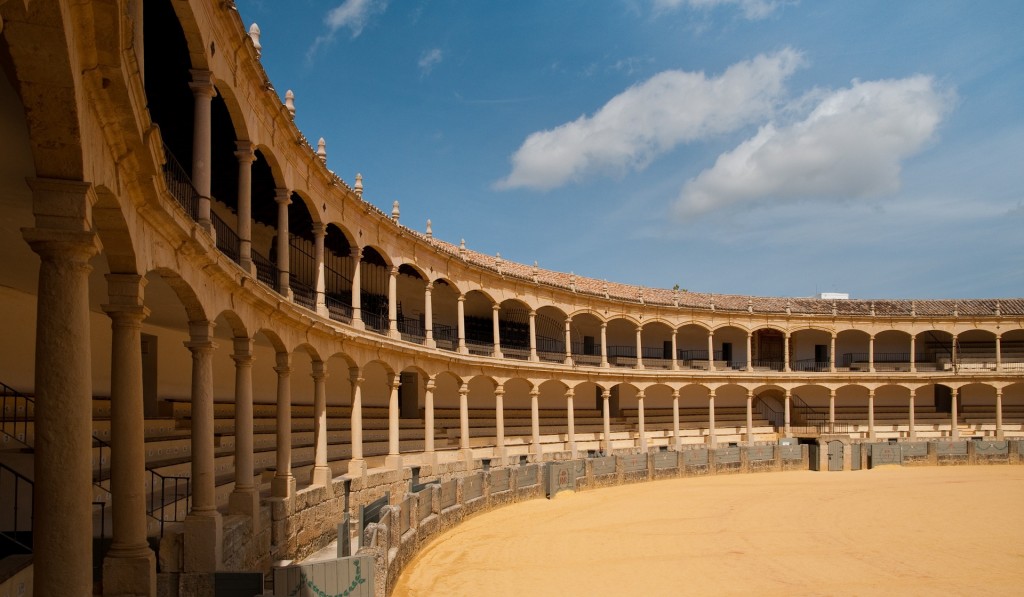 Outside the arena are statues of Antonio Ordonez, another important Ronda bullfighter and of a life-size fighting bull, which better enables you to understand how hard it must be to keep still when one of these half-ton animals is running at you.  There are several daily tours of the bullring and you can learn more about the controversial spectacle that takes place within it, at the excellent museum.

Ronda’s bullfighting culture-inspired not one but two works by the Nobel Prize-winning author Ernest Hemingway. Ronda-born Cayetano Ordonez (1904-1961) was the model for the swaggering bullfighter Pedro Romero in Hemingway´s Fiesta – a novel which also made the bull-running fiesta of Pamplona world-famous (some would say much for the worse). Cayetano’s son, Antonio Ordonez (1932-1998), became a great torero as well and his intense rivalry with matador Luis Miguel Dominguín during the 1959-60 season was documented by Hemingway in A Dangerous Summer.

The writer is remembered in Ronda by the Paseo de Ernest Hemingway, a pathway that runs alongside the top of El Tajo river in the ‘new’ part of town and which offers some of the best views of the surrounding landscape. 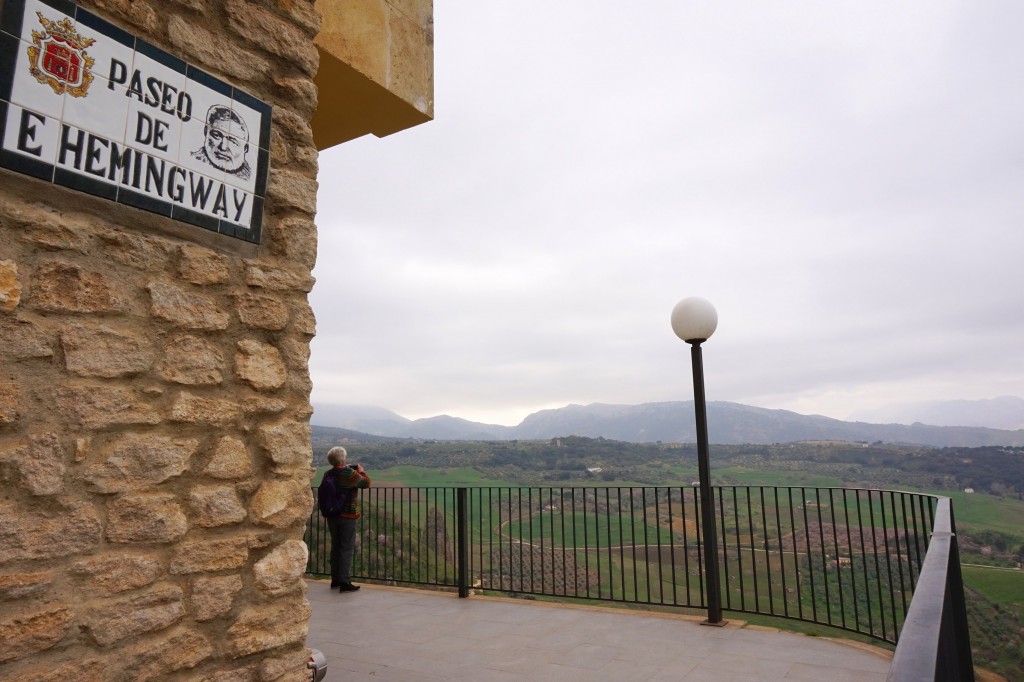 La Casa del Rey Moro was in fact built in the 18th century, long after the town fell to the Christians in 1485. It sits atop El Tajo gorge on the old Moorish side of town and, although the palace is closed to the public, you can still walk down the steep stone staircase of the Water Mine – which actually does date from the city’s time under Muslim rule – all the way to the bottom of El Tajo. 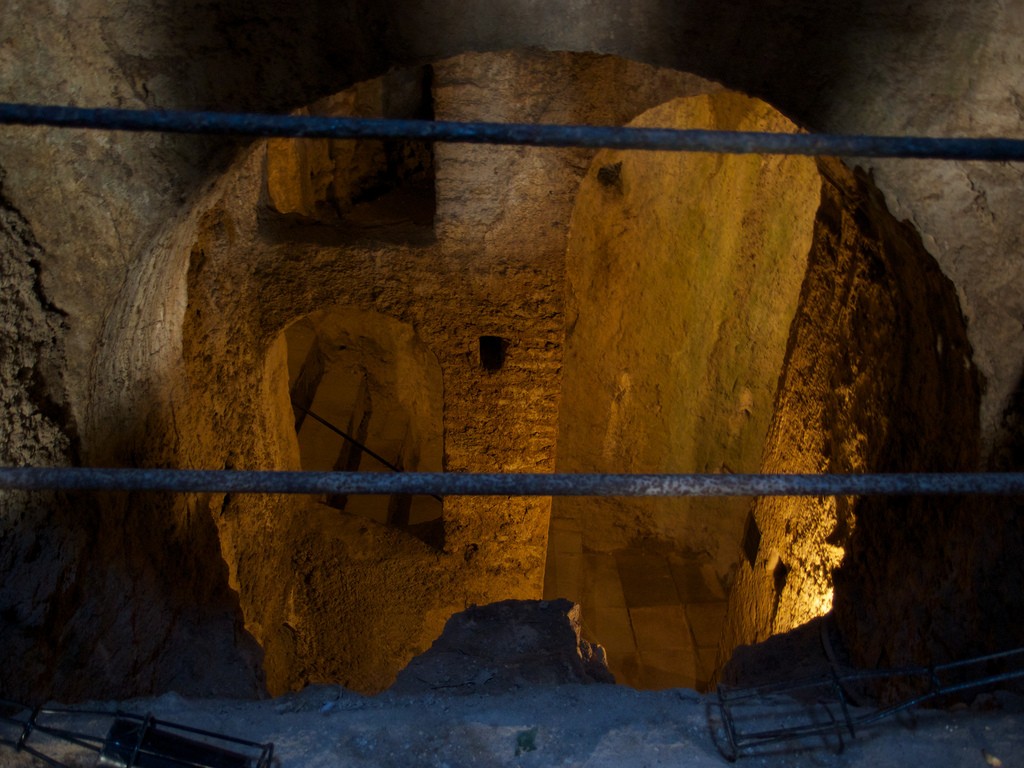 During Ronda’s Moorish occupation, it was to this perilous staircase that Christian slaves are said to have been chained in order to pass containers of water up to the town from the river Guadalevin. The neck-craning views of Puente Nuevo from the bottom of the gorge are well worth the 300-step trek back to the top.

On either side of the New Bridge, there are scenic walking routes to the bottom of El Tajo canyon. On the side of the old town, a little country path takes you down the hillside and under the great bridge itself, via some slightly hairy sections that resemble a much lower but less well-maintained version of Malaga’s terrifying Caminito del Rey.

On the side of the newer part of town, a better-maintained pathway takes you across one of the quaint older bridges that New Bridge was meant to improve upon, and back up the other side of the gorge past the Casa del Rey Moro. Both of these undemanding walks provide an abundance of spots from which to contemplate the untamed beauty of Ronda’s location. 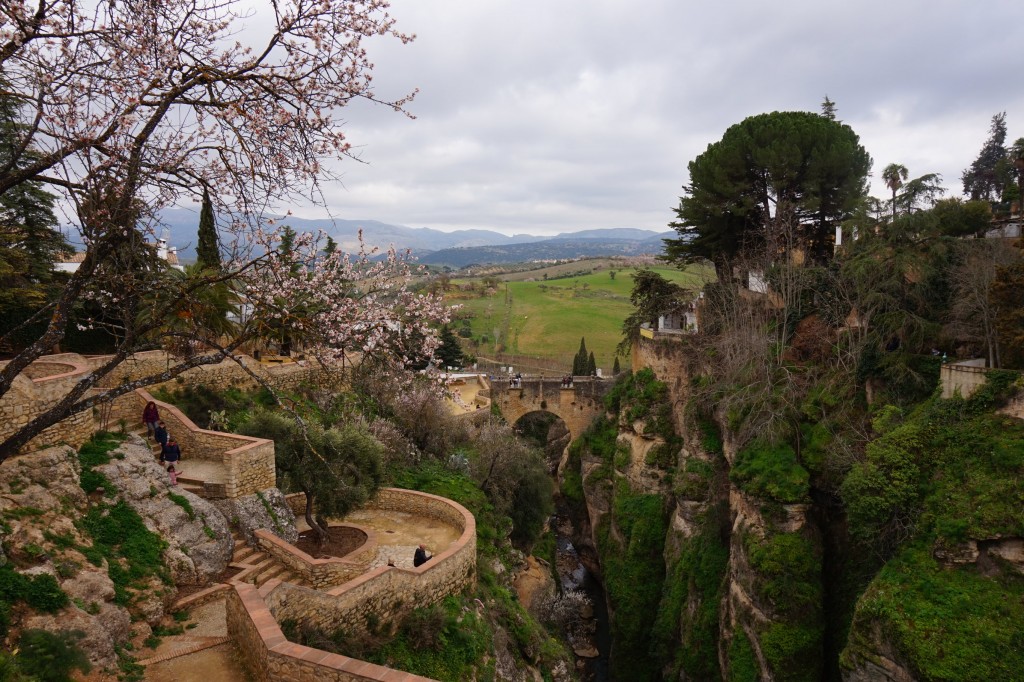 El Tajo canyon not only rendered necessary Ronda’s most iconic attraction, but it also divides the town into two separate halves, each with its own style and atmosphere. La Ciudad – or The Town – is the original Moorish part and weaves around one central Street, Calle Armiñan, south of Puente Nuevo.

The best time to explore the old quarter -Ronda was under Muslim dominion from 712 to 1485- is in the evening or at night when the coach-loads of tourists are in their restaurants or hotels on the other side of the canyon.

On the northern cliffs of El Tajo is the more commercial part of town, known as El Mercadillo  or The Little Market – it was developed after the Arabs were expelled towards the end of the fifteenth century. The heart of modern-day Ronda has retained all of the beauty and charm of Andalusia’s gorgeous ‘white villages’, even if its Plaza España is now home to a Macdonalds. 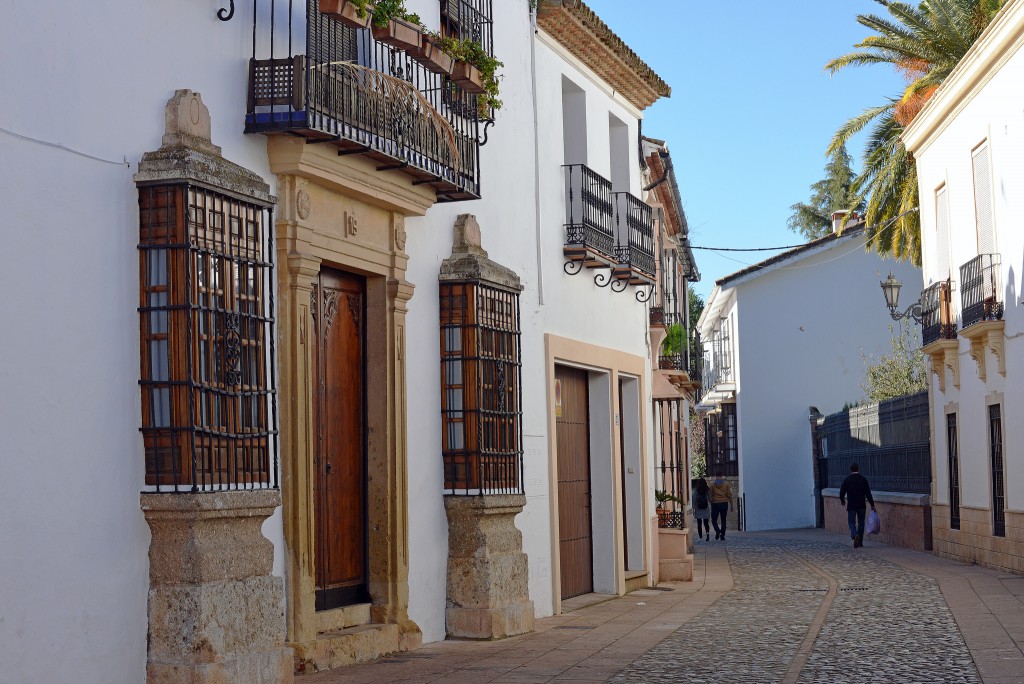 Despite the fact they were in continual use for some 600 years, Ronda’s 10th and 11th-century Arabic baths are among the best-preserved in Spain (along with those in Granada). 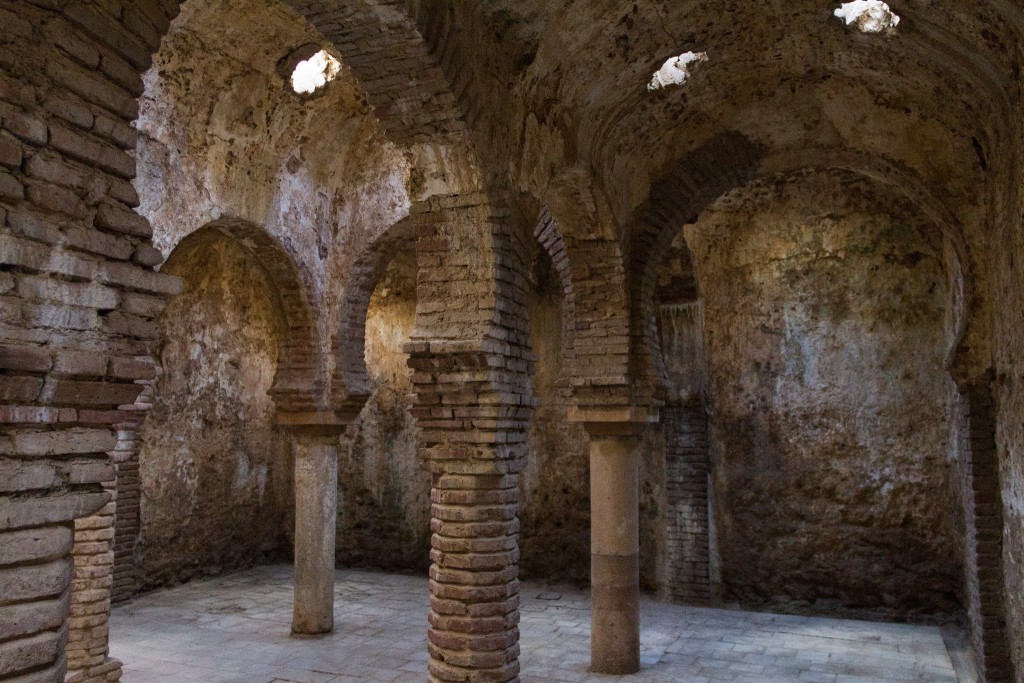 Ronda´s Arabic baths are among the best-preserved in Spain; Bobo Boom, flickr

Though their working parts are no longer in existence, it is not hard to imagine the busy social life that unfolded within these cool, domed rooms, the ceilings of which are attractively studded with star-shaped vents for light and ventilation. They were situated outside the old city walls, near to one of Ronda’s original bridges, the Puente Arabe.

The pathway that runs from Ronda’s bullring and along the cliff-edge to Paseo Ernest Hemingway and Puente Nuevo contains a number of viewing points that are hilariously called ‘Balcons Coños’ in Spanish. These balconies jut out over the cliffside and provide straight-down views that will make even the least vertigo-suffering of visitors shudder.

These vertiginous platforms feel much sturdier than they look when viewed from a distance, especially if there are a number of (cursing) visitors crammed onto them.

If you can bring yourself to inch onto one of the precipitous balconies overhanging El Tajo canyon, they provide a perfect spot from which to try and catch sight of some of the area’s beautiful airborne wildlife. 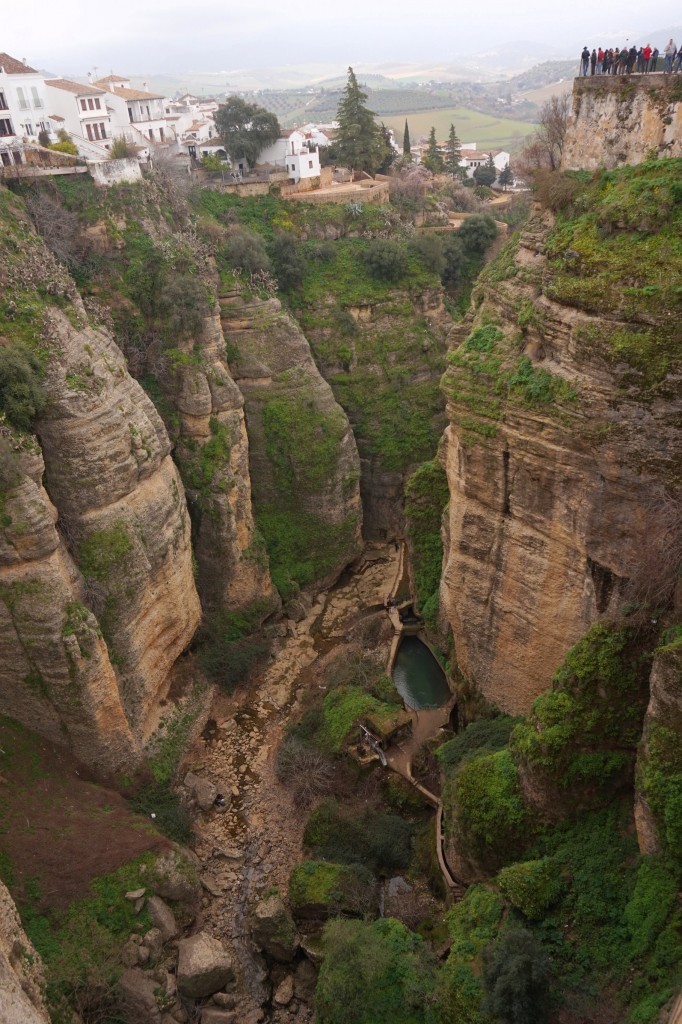 “El Tajo” gorge is home to many beautiful species of birds; Encarni Novillo

The gorge that splits Ronda in two is an ideal hunting and nesting ground for its many species of bird, among which are eagles, kestrels, falcons and the menacing Griffon Vulture, which has a giant 9-meter wingspan. Ronda’s clifftop location allows you to feel part of these magnificent birds’ natural habitat in a way you rarely can at less stomach-churning heights.