The origin of Charles V Palace (Palacio de Carlos V) was the need for a place that would include all the comforts of the time for the Emperor and his family, like the palaces, which were their summer residence, did not cover their needs.

The Emperor ordered the construction of the palace next to the Alhambra in order to enjoy its wonders. The architect in charge of the works was Pedro Machuca, an experienced architect in love with the Renaissance. The works started in 1527 and were totally finished in 1957. The construction went through several stages, the lack of financing resources, revolts that stopped the works, etc. The building was sometimes neglected to such an extent that the ceilings collapsed.

The palace is square and its main façade is 63 meters wide and 17 meters high. Its circular patio is unique and it is the most important building of Renaissance style in Spain. Only the southern and western façades are completely decorated. The northern and southern sides are not because they are connected to the palaces of the Alhambra. The travel giant Lonely Planet announced in 2018 the quintessentially Andalusian city of Seville as its top travel city. Home of the flamenco, bullfighting, tapas, and over 500 hundred years of Muslim history. So here are our top five Muslim heritage sites you simply have to visit in the stunning Spanish city once known as “Ishbiliya”. This 90-meter-high decorated bell tower was once the minaret of the city’s mosque. It was constructed between 1184 and 1198, at the height of Almohad rule. The delicate geometric patterns, now common throughout the Muslim world, sit on brickwork that changes color with the light. Said to be Spain’s most perfect Islamic building, the Giralda is the official symbol of the city of Seville. A climb to the top takes you into the 16th-century Christian additions, made after the minaret was converted into a bell tower and the mosque into a cathedral. This is also the best place in town for spectacular views across Seville. This is Seville’s Alhambra. Smaller but equally beautiful, the Alcazar is often overlooked by seekers of Andalusian Muslim heritage. This is because what you see today has been mainly built by Christian kings on the site of the original 10th-century Muslim fort. However, their architects were Muslims, and nowhere is this more apparent than the “jewel” in The Alcazar’s crown, the Mudejar Palacio de Don Pedro. This sumptuous courtyard built by King Pedro I is a direct replica of the one in Granada’s Alhambra, complete with water feature and arabesque arches. Even inside the Alcazar, Christian kings praised their Lord in the then-fashionable Arabic language, using inscriptions such as “Wa la ghalib ill Allah”: “There is no victor but God.”

This 13th-century “Tower of Gold” is also an Almohad construction. It sits overlooking the River Guadalquivir (from the Arabic “Wadi al Kabir”, or “the Great River”) at what was once a corner of the ancient city. The tower gets its name from the belief that its dome used to be covered in golden tiles. Today, it is home to a maritime museum.

Once part of the Great Mosque of Ishbiliya, this courtyard and the Giralda are all that remain of the old Islamic building. It contains 66 Naranjos (orange trees, which are said to have been introduced to Andalusia by the Muslims) and has many of the arabesque arches along the original garden walls that flank the Puerta del Perdon, the stunning Muslim-era gate. With a trickling fountain in the middle, the Patio de Los Naranjos is the perfect oasis to sit and contemplate Seville’s five centuries of Muslim civilization.

A modern homage to the ancient culture of Ishbiliya, the Aire de Sevilla offers a classical Moorish hammam experience in a setting that evokes Muslim Iberia. The baths are housed in a Riyadh-like set of rooms overlooking an open courtyard, where visitors are whisked back to the age of the Morisco (Muslim Spaniard). The central water fountain is surrounded by eastern lanterns, Moorish tiles and furniture where customers sit sipping warm mint tea. The Aire de Sevilla offers a host of treatments inside rooms lit by soft candlelight, including a cold pool, two warm ones, and a steam room.

Located inside the Calahorra Tower, opposite the Great Mosque, at the end of the Roman Bridge. Its aim is to provide a recreation of the Cordoba of the period between the 9th-13th centuries, at a time of brilliant cultural, artistic and scientific achievement. Its modern facilities include a system of headphones and infrared data transfer that guide you through the eight themed rooms with dioramas.

The building rises up at the south of the Roman bridge, the far end from the city center. It is a fortified gate originally built by the Moors (Almohads) and extensively restored by King Enrique II of Castile in 1369 to defend the city from attack by his brother Pedro I the Cruel from the South. It was originally an arched gate between two towers. Enrique II added a third cylindrical shaped tower connecting the outer two.

In the 18th century, it was used as a prison and in the 19th century, it was a girls school. The tower was declared a national monument in 1931. the restoration of the tower and the Romain bridge and the surrounding area in 2007 was awarded the EU prize for cultural heritage “Europa Nostra” in 2014.

It currently houses the Museo Vivo de Al-Andalus. This fascinating museum is particularly educational with audiovisual presentations which vividly depict how life was in Cordoba around the 10th Century AD when three cultures lived side by side Christianity, Muslim and Judaism. There is a scale model of the Mosque as it was in Moors times before the cathedral was constructed.

Visitors are also able to go on the roof for a spectacular view of the mosque and the city.

1st May to 30th September The old Mosque of Cordoba

The Medieval Mosque of Cordoba

A Brief History of the Mosque-Cathedral of Cordoba

Córdoba’s Mosque-Cathedral is a stunning monument to the two religions and cultures that have shaped Andalusia: Islam and Christianity. A Renaissance church squats right on top of what was once the most important mosque in the Islamic kingdom, making this building a must-see for anyone visiting Córdoba.

The site was originally home to a Roman temple, which was later replaced by a Christian Visigoth church. In 711, when the Moors took Andalusia from the Christians, the Visigoth structure was divided into two halves and used as a place of worship by both Muslims and Christians – a remarkable act of tolerance, given the fervor of the times. But the reign of religious pluralism in Córdoba didn’t last: in 784, on the orders of the Emir Abd al-Rahman I, the church was destroyed and work on a great mosque began. Construction lasted for over two centuries and, when the building was completed in 987 with the addition of the outer nave and courtyard, Córdoba’s mosque was the largest in the Islamic kingdom, save only for that of Kaaba in Arabia. 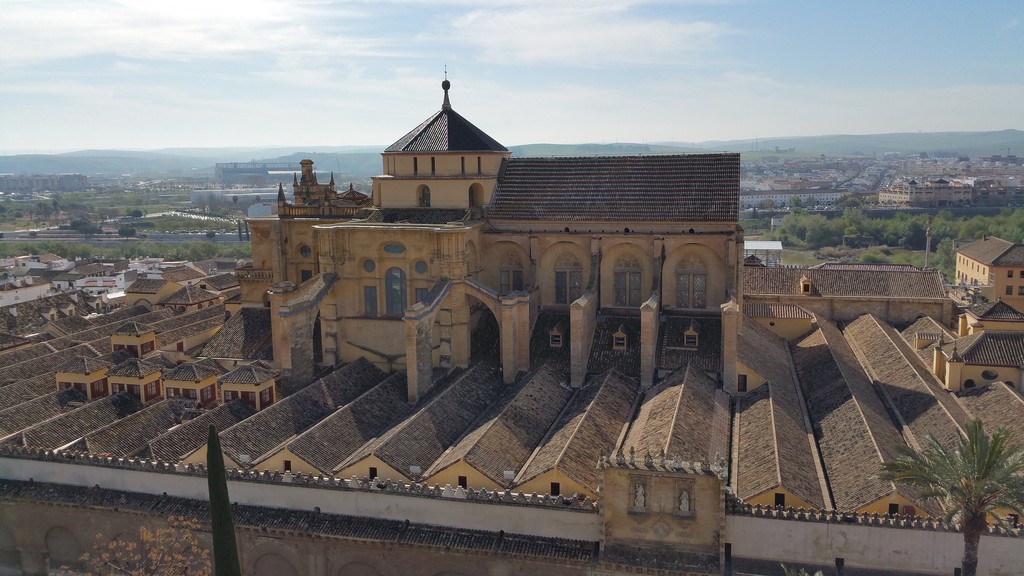 Is it a mosque or a cathedral? Answer: it’s both; waldomiguez, pixabay

When construction was in its final phase in the late 10th century, the Islamic kingdom – under the Omega Caliphate – was at its most powerful. To reinforce Moorish might in Spanish Christian territories, the feared warrior Al-Mansur embarked on a violent rampage through northern Spain and, upon entering Santiago de Compostela, he conceived of an ingenious way in which to outrage his enemies. First, he rode straight into the city’s cathedral on horseback and let his steed drink from the holy font; as if that weren’t insulting enough, Mansur then had the building’s bells removed and transported to Córdoba, where they were melted down and made into lights for the city’s mosque. 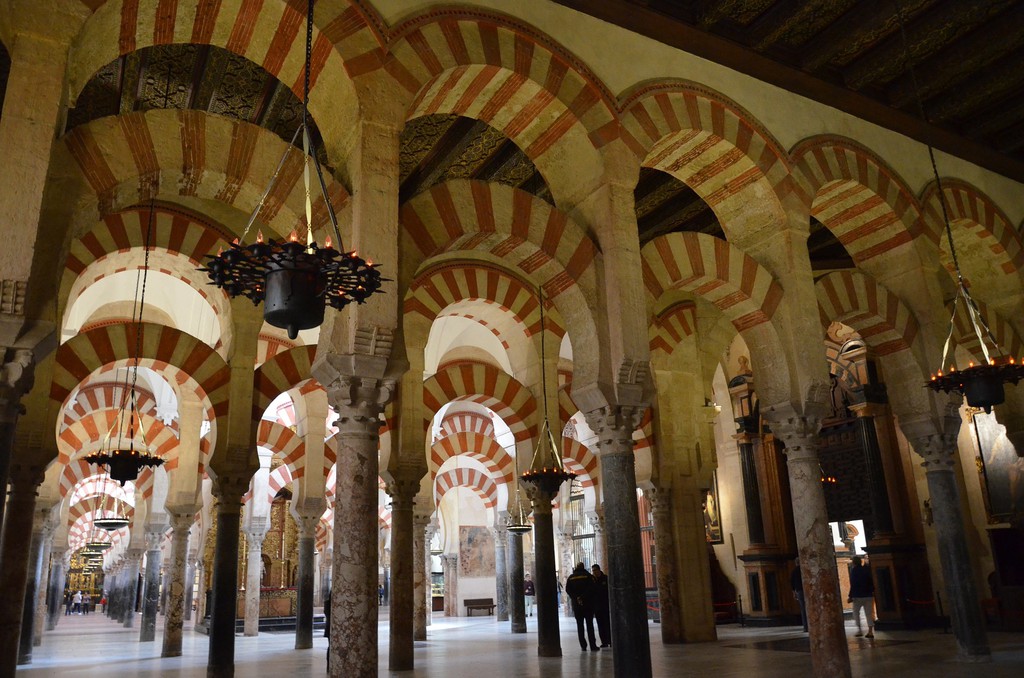 The famous double-arches in the mosque’s main hall; Amoniaq, pixabay

In 1236, Córdoba was recaptured by the Christians. King Ferdinand III immediately ordered the mosque’s lanterns to be transported back to Santiago de Compostela, where they were converted back into bells for the city’s cathedral. Subsequent Christian monarchs altered and added to – but never demolished – the mosque, resulting in the hybrid structure that remains.

In the mid-13th century, King Alfonso X oversaw construction of the Villaviciosa and Royal Chapels (the latter of which was rebuilt by Henry II in the 14th century). And in the 16th century, Charles V added the great Renaissance nave right in the middle of the Mezquita. Apparently, though, he was disappointed with the result. 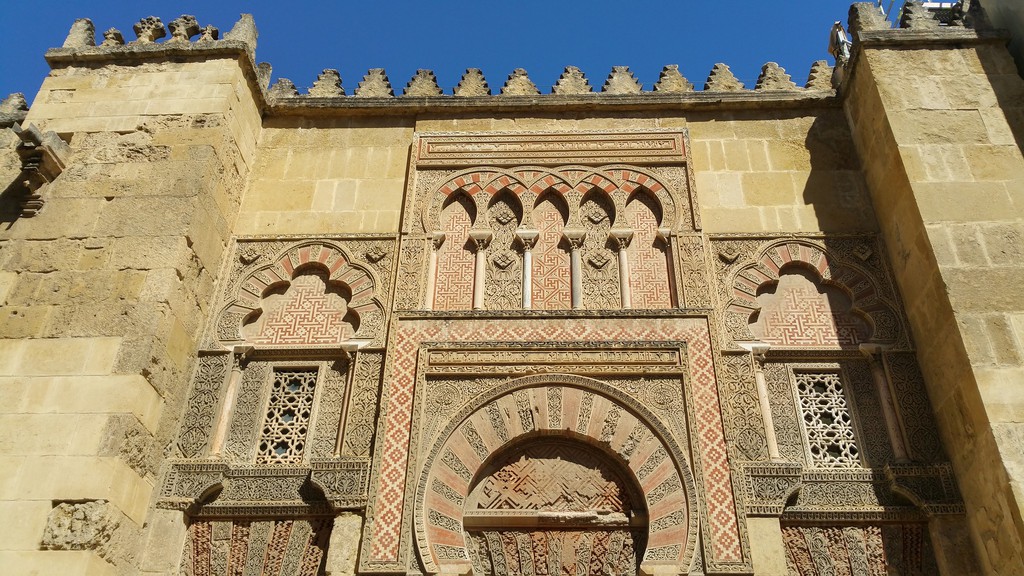 The mosque’s most-photographed aspect is its vast main hall, which is supported by over 850 double-arched columns. Showing no respect for their forbears, the Moors plundered the site’s Roman and Visigoth remains for the jasper, onyx, marble and granite needed to build them – just as, in the early 11th century, they would use material from Malaga’s great Roman amphitheater to build the city’s Alcazaba fortress. The iconic and somewhat hypnotizing double-arch feature was the result of architectural necessity since with single-arch columns (about seven or eight feet high) the immense roof would have been too low. Sunlight and shadows create unusual effects as you wander amongst them, contemplating the troubled history of this great building.