Granada’s star attraction and one of Andalusia’s most iconic sights is the Alhambra fortress. The greatest surviving relic of southern Spain’s 800 years under Moorish rule, between the 8th and 15th centuries, this sprawling complex sits forbiddingly atop the Darro Valley, with the crisp peaks of the Sierra Nevada in the background. Originally dating from the 9th century, the fort and walls were extensively rebuilt in the 1200s by the Moorish ruler of what was then the Emirate of Granada, Mohammed ben Al-Ahmar. Particularly beautiful are the Nasrid palaces; built by the Nasrid Kings – the last Moorish rulers of Granada – during the 13th and 14th centuries, which feature some of the Alhambra’s most intricate interiors.

The Generalife functioned as the Alhambra’s Summer Palace, with its exquisite gardens providing a cool haven for the sultans during the furnace of Andalusian summers. Narrow paths run alongside delicate flowerbeds and ponds so still that the elegant archways and whitewashed walls – which separated the palace’s vegetable gardens – are perfectly replicated in the water. An external walkway connecting the Generalife’s north and south sides provides a stunning view of the old Arabic neighborhood of Albaicín. Indeed, Albaicín itself is one of the most impressive sights in the city when viewed from the turrets and windows of the Alhambra and Generalife.

If you’re at the top of the hill to visit the Alhambra, don’t go back down without first wandering around the Carmen de los Martires Gardens, one of the city’s most attractive green spaces. Because the majority of visitors head straight for the Alhambra, this lovely haven of flowerbeds, small ponds and leafy paths is only ever sparsely populated with guests. In spring and summer, its shaded walkways provide a sanctuary from the powerful sun, and its views of the landscape beyond Granada give a sense of space that can be lacking in the cramped city center. A fairytale tower sits in the middle of this verdant oasis; climb up its small spiral staircase and survey the gardens and Granada from the city’s most romantic viewpoint.

No visit to Granada would be complete without a visit to its oldest neighborhood, the former Arabic quarter of Albaicín. This compact network of winding cobbled streets, whitewashed houses and jasmine-scented squares perches on the hillside the other side of the Darro River from the Alhambra. It requires a little exertion to reach the top of Albaicín, especially in spring or summer, but it will be energy well expended: the views of the Alhambra and the Sierra Nevada mountains from its most popular square, the Mirador San Nicolás, are some of the best in the city. There is also a lively flea market every Saturday morning on Plaza Larga, one of the barrio’s prettiest spaces.

One of Albaicín’s key architectural attractions is this elegant and understated Moorish palace. Its name means “Home of the Honest,” and it was the residence of the sultana Aixa, mother of Muhammad XII (known as Boabdil to the Spanish), the last Moorish King of Granada. In traditional Moorish style, its quarters and rooms are located on three levels around a central courtyard and pool, which provided shade and cool in the summer. Also, remaining are parts of what were once extensive gardens and orchards. Aixa is reputed to have bitterly rebuked her son for losing Granada as they fled the conquered city in 1492; perhaps she didn’t just have the loss of the mighty Alhambra in mind as she did so. 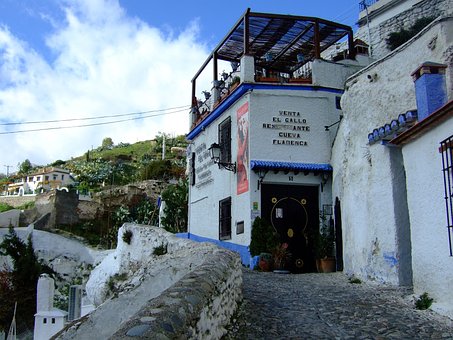 Abbey of the Sacromonte

High up in the untamed countryside above Granada’s gypsy quarter is the Abbey of Sacromonte, the neighborhood’s key historical attraction. This now-neglected 17th-century structure was built by Archbishop Pedro de Castro y Quiñones on a site that was supposedly the final resting place of Saint Caecilius, a martyr and Granada’s first bishop in the 1st century A.D. It was an inspired spot to choose, located so far above the city that the stillness and solitude feel almost like presences. For €4 you can visit some of the interiors and, best of all, the narrow, spooky Holy Caves that are annexed to the abbey.

The Carrera del Darro is Granada’s prettiest street. Starting at Plaza Nueva and winding down towards Albaicín alongside the Darro River, it is lined with centuries-old buildings rising up from the riverbank, their worn façades covered (in spring and summer) by lush creepers and colorful blossom. As you stroll along, peer over the ancient stone wall to see the Darro River gently flowing between verdant banks; here, the river passes under two of the oldest surviving bridges in Granada, and remnants of a few more that used to connect Albaicín with the Alhambra.