What to See in Seville

Seville has something for everyone. From its great Moorish and Catholic monuments to its historic bullring, and from great tapas bars to enchanting old neighbourhoods and giant wooden mushrooms, these are the top 20 attractions for you to seek out while you’re in the Andalusian capital.

Along with the cathedral, Seville’s key architectural attraction is the Royal Alcázar Palace. Work on this great palace complex began in the 10th century, when the Umayyads built a Moorish fortress attached to the Roman city walls, but it was not until the 12th century that the first royal palace was built on the site, by the then-ruling Almohad Dynasty. Additions and renovations continued on and off until the 19th century, resulting in a structure that showcases a mix of Moorish, Renaissance and Mudéjar architecture, with the latter being particularly notable in the Mudéjar Palace. The upper floors of the Alcázar are the Spanish royal family’s Seville residence, making it Europe’s oldest continually used royal palace. 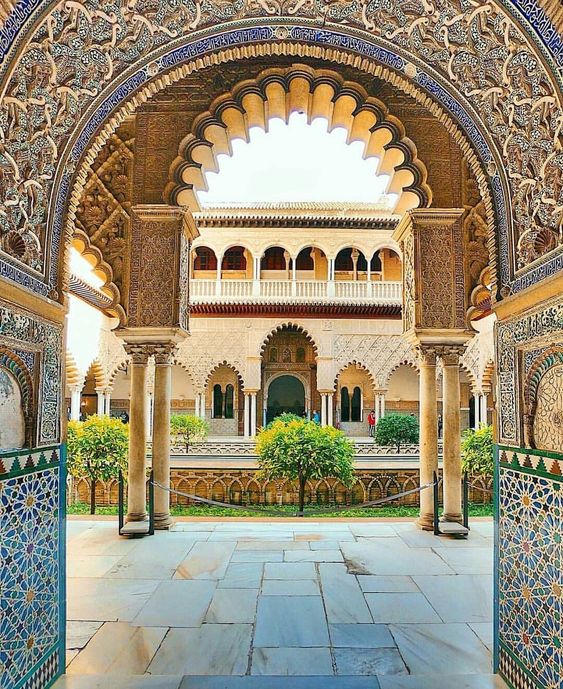 Seville’s greatest Catholic monument amazes with its sheer size: it is the largest Gothic cathedral in the world. Construction of this sprawling Gothic complex, which houses 80 chapels and has the longest central nave in Spain, began in 1401 on the site of the city’s former mosque. Work continued for over 100 years, and in 1507 the cathedral was finally completed, having spectacularly succeeded in fulfilling the design team’s aim to make something ‘so beautiful and so magnificent that those who see it will think we are mad’.

One of Seville’s most popular – and unusual – attractions is The Metropol Parasol, known locally as Las Setas, or ‘the Mushrooms’, because of the distinctive shape of its vast wooden canopies and supporting pillars. When work started on the Mushrooms in 2005, Roman remains were found underneath Plaza Encarnación, making construction a lengthy and controversial process. To preserve the extensive remains, which can be seen on the lower ground floor, these enormous wooden fungi are supported on just a few elegant white pillars above the square. On the monument’s roof, a winding walkway provides stunning views over the city, especially at sunset.

All that remains of Seville’s great mosque is part of its minaret, which is now the cathedral’s Giralda bell tower, another of Seville’s key architectural attractions. The minaret, which was built during the Almohad period, was originally topped with giant copper globes, but these fell off in an earthquake in 1365. The ruling conquistadors, perhaps interpreting their removal as a hint from the universe, decided to replace them with a Christian cross and bell tower. Except for the final section, which features stairs, the route to the top (for stunning views) is via ramps – supposedly so it can be reached by horseback, although it’s unclear whether this means you have to buy two tickets or just one.

Archive of the Indies

Documenting the Golden Age of the Spanish Empire that followed Christopher Columbus’s exploration of the Americas in 1492 is Seville’s Archive of the Indies, a must-see for history boffins. These UNESCO-protected 16th-century buildings house some 80 million documents relating to the Spanish Empire of the 16th, 17th and 18th centuries, a period when Seville was the empire’s most important city. If you think that sounds like a little too much reading for one afternoon, fear not: as well as the beautiful old books and the palatial buildings themselves, other sights here include a 17th-century cannon, maps charting the entire Spanish Empire and several paintings by Goya.

One of Seville’s Mudejar classics is the Plaza de España, a stunning development built-in 1928 in preparation for Seville’s hosting of the Ibero-American Exposition of 1929. The half-moon-shaped building is fronted by a moat and borders on a plaza with a beautiful fountain at its center; it showcases a striking mix of Mudéjar and Renaissance styles, with splashes of Art Deco to be seen on the colorful façades. Boating can be enjoyed on the moat, which is spanned by four bridges representing the ancient kingdoms of Spain.

In preparation for Seville’s hosting of the Ibero-American Expo of 1929, the southern part of the city received a costly facelift. At the heart of this redevelopment was the Maria Luisa Park, a botanical garden and the Andalusian capital’s largest and most attractive area of greenery. It is a beautiful place to stroll in spring, when the park’s many species of plants and flowers are in bloom and when the local residents – doves, parrots, ducks and swans – are on display. Stretching along the banks of the Guadalquivir, its half-mile of shaded walkways, tiled fountains, ponds and tropical foliage is also home to the Mudéjar Pavillion, in which the Museum of Popular Arts and Traditions of Seville can be found

Visible from any of Seville’s central bridges is the 13th-century watchtower known as the Torre de Oro, or the ‘Tower of Gold’. It was built by the Almohad rulers of Seville between 1220 and 1221 and has undergone several restorations over the intervening centuries, the most recent of which was in 2005. Nowadays, it houses Seville’s small but interesting Maritime Museum, which explores the importance of the Guadalquivir River and Atlantic to the Andalusian capital’s history. 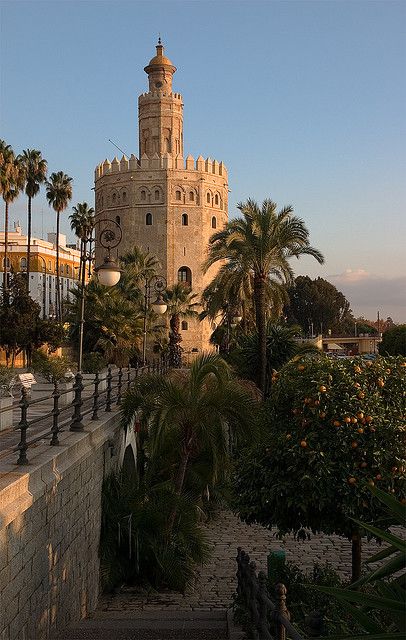 This beautiful 15th–16th-century mansion is one of central Seville’s hidden treasures, and its exquisite gardens, though smaller in scale, match anything you’ll see in the Alcázar. Begun by the wealthy conquistador and Mayor of Andalucia, Pedro Enriquez de Quiñones, in the late 1400s, Casa de Pilatos is another of Seville’s classic Mudéjar structures, built around a central courtyard in the traditional Andalusian style. Its name – Pilate’s House – was bestowed (hopefully with a touch of mockery) after Quiñones’ son Fadrique traveled to Jerusalem in 1519 and returned overflowing with enthusiasm for the Holy Land. The palace’s undeniable good looks have earned it a starring role in two films: 1962’s Lawrence of Arabia and 2010’s Knight and Day.

Seville’s Real Maestranza bullring is one of the most attractive and important plazas in Spain. Construction began in 1761 on the site of the city’s old rectangular plaza de Toros and was finally completed in 1881. Particularly attractive is the Prince’s Gate (the main entrance), the ornate black iron gates of which are the work of Pedro Roldan, and which were originally the property of a convent. Being carried through these on the shoulders of fellow matadors and the public is a mark of great triumph, and one of the highest honors attainable by a matador in Spain. The Maestranza’s excellent museum explores the history of bullfighting, and daily tours of the arena are available.

Triana is Seville’s former Gypsy quarter and one of the city’s most distinctive attractions. From its pretty, myth-laden streets have come some of the most influential bullfighters of the last couple of centuries, including the legendary Juan Belmonte, one of the greatest matadors in the history of bullfighting. Its colourful, quaint streets are lined with old-style tapas bars, the walls of which are often plastered with faded bullfighting posters, photos of flamenco artists and weeping Virgin Marys. It is also known for its locally made ceramics, which adorn the walls of its old, whitewashed houses, and one of Seville’s best and most lively markets, the Mercado de Triana.

The Feria de Abril, Seville’s legendary fiesta, takes place two weeks after Easter and is one of Andalusia’s biggest fairs. This week-long party has left its humble 19th -century cattle-market beginnings long behind, and its sanded fairground – or recinto – now hosts over 1,000 individual marquees, or casetas, every year. Run by local charities, businesses and collectives, these casetas are where the locals dance and drink until the small hours of the morning, every night for a week. Although the vast majority of the marquees are private and require an invitation for entry, there are several public casetas which are just as much fun. If you’re planning a visit to Seville in spring, make sure you plan it to coincide with this annual extravaganza.

Winding along beside the Alcázar in the heart of Santa Cruz is a narrow, shaded alleyway called Calle Agua, named after a mini-aqueduct that used to run along the top of the Moorish palace’s walls. This mysterious path brings you out onto the absurdly romantic Plaza Alfaro, always busy with tourists pointing their cameras upwards and snapping away at the building said to have inspired the balcony scene in Shakespeare’s Romeo and Juliet. Whether this tale is apocryphal or not, it’s easy to imagine a latter-day Romeo scaling the beautiful facade to reach the object of his desire.

Surrounding the central plaza on which Seville’s mighty cathedral squats is the charming old Jewish neighborhood of Santa Cruz, one of Andalusia’s most iconic barrios. This was the neighborhood into which Ferdinand III confined the city’s Jewish population when he took the city from the Moors in 1248; nowadays, it’s the heart of historic Seville and the first place many tourists head to. In this maze of narrow cobbled streets and achingly romantic squares are to be found some of the city’s best tapas bars and flamenco joints, but just to wander around Santa Cruz (almost certainly getting lost, if it’s your first time) is an experience in itself.